Home
Blog
BEING PICKED AS A BRIDES MAID IT’S THE ULTIMATE COMPLIMENT ONE FRIEND CAN PAY ANOTHER, RIGHT?

BEING PICKED AS A BRIDESMAID IT’S THE ULTIMATE COMPLIMENT ONE FRIEND CAN PAY ANOTHER, RIGHT?

Turns out, not always. Hollywood superstar and four-times-a-maid Jennifer Lawrence was on to something when she told Vanity Fair last year: ‘Weddings rock, but I’ll never be a bridesmaid again. It’s horrendous. If anyone asks me, I’m going to say, “No. hat part of my life is over”.’ Brutal, perhaps, but I know how she feels. I, too, have been a bridesmaid four times. First, for my auntie in the early ’90s; aged three, all I had to do was make it down the aisle without throwing a tantrum (mission accomplished). Since then, I’ve responded to far taller orders. I’ve lown to the States to help my expat best friend choose her dress; I’ve covered a £400 shortfall when the sums for my sister’s hen do didn’t quite add up, and I abandoned my third date with my now husband in order to schlep to another bride’s dress itting in her hometown.

BEING PICKED AS A BRIDES MAID IT’S THE ULTIMATE COMPLIMENT ONE FRIEND CAN PAY ANOTHER, RIGHT? Photo Gallery

And I’d do it all again in a heartbeat, for the three wonderful girls who, in turn, I asked to help me up the aisle in August last year. But I haven’t always been such a shining example. Recently I was forced to resign from my ith outing as a bridesmaid ater one bridezilla drove me to the edge of sanity. Old ‘friends’ he bride and I – let’s call her Polly – met at university, where we became conidantes, sharing our homes, friends and secrets. But a few years of campus and into our careers, she found her irst serious boyfriend at around the time mine dumped me, and our lives quickly diverged – hers to weekends in the suburbs with his family, mine to more parties than ever and as much adventure as I could aford. In the two years that followed, our paths crossed perhaps four times, and she rarely attended any events with our old circle. hen one day, she got engaged – and suddenly I was invited out for champagne with a group of girls I’d never met before. Looking back, I should have found a way to turn down the request then and there, but how do you refuse a written invitation handed to you in front of ive strangers? I soon discovered the six of us were to be less her bridesmaids, more her brideslaves. 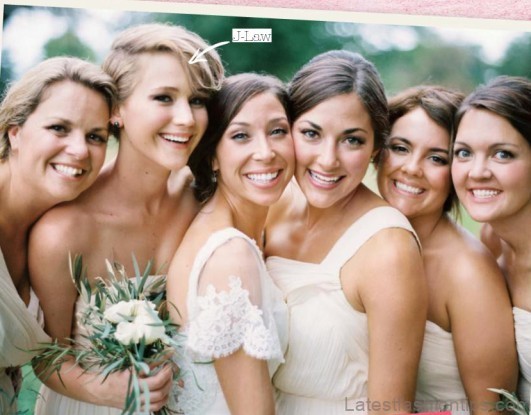 In the year that followed, I was obliged to attend multiple dinners, days out and shopping trips with ‘just us girls’ – bearing in mind we had nothing in common bar the bride – and was constantly pressured about my marital status (I’d just started dating the man I’m now married to; we’d been together then for just over a year). Somehow I was expected not to raise an eyebrow (or both) when Polly didn’t invite him to her wedding. he inal straw came when, ater her hen party, she phoned me in tears, ranting that I hadn’t been enough fun – or perhaps ‘not the right kind of fun’ – over the weekend, that I didn’t seem to care and that the other bridesmaids hated me. his was news to me. he hen do had been the classic tried-and- tested formula, a weekend in a house in a seaside town, with dinner, cocktails and a night out at a cheesy club. It was good fun, everyone got on really well and we all played saucy games with an (in)appropriate amount of enthusiasm.

Or so I thought. Although she didn’t say as much, I think it was the fact I couldn’t come to the ‘maids only’ night preceding the hen weekend that stoked her ire – I was at another hen party, but then this was something she’d known about for months. Yet in the ranting phone call, no speciics were given as to what I’d done wrong, despite hours of trying to talk her around. Ater a night spent in a cold sweat wondering how I could face walking up the aisle behind her in just a few weeks, I realised that I simply didn’t have to. he next day, I told her I thought it was better for both of us if I resigned as a bridesmaid, because I was worried about accidentally upsetting her in the run-up to the big day, considering I still couldn’t quite fathom where I’d gone wrong so far. he relief in her voice was palpable – she was grateful I’d quit, and clearly hadn’t been able to work up the courage to ire me herself. I still think I dodged a bullet – I later heard that one of the remaining bridesmaids had been forced to have her hair cut on the morning of the wedding because both the bride and hairdresser decided the lower crown ‘didn’t sit right’ on her lovely long hair. Pulling rank So, why is it that impending marital bliss can so easily translate into social hell for a bride’s closest girlfriends? J-Law – pretty wisely, if you ask me – has also rejected the idea of ever having bridesmaids when she gets married in order to avoid having to ‘rate’ her friends. Although it’s not meant to, the experience can leave a girl feeling like she’s vying for position on some kind of satin-clad leaderboard. Worse still is when the bride pulls rank, treating her chosen maids as if they really are her minions (yep, it happens). It upsets the delicate equilibrium of friendships, encouraging demands to be made which can be easy to entertain if the relationship is otherwise unstrained – but if there are any unresolved issues lurking in the background, be sure that entering the relationship of bride and bridesmaid will bring them rushing to the surface. he truth is, Polly asked me for all the wrong reasons – to tick a box marked ‘uni pal’ in her maids line-up, and then expected a level of dedication it’s unfair to ask of someone you wouldn’t normally phone for a chat. So ater all this, I was especially selective when it came to choosing my own maids. And they were awesome – for the most part…