Home
Blog
YOU THINK YOU KNOW WHAT YOUR PARTNER’S FEELING AS HE PREPARES TO LEAVE FOR A STAG DO, DON’T YOU?

YOU THINK YOU KNOW WHAT YOUR PARTNER’S FEELING AS HE PREPARES TO LEAVE FOR A STAG DO, DON’T YOU?

Joy at the freedom to drink enough alcohol to kill a small elephant. Delight at the opportunity to spend a whole, debauched weekend with his pals. And, of course, excitement at the fact you won’t be there to stop him getting involved in some unspeakable (and possibly unforgivable) manly nonsense. All perfectly reasonable assumptions – not least because there is an element of truth to all of them. However, that shortlist forgets one key emotion I guarantee is consuming your iancé as he walks out of your front door. Fear. Having been on 17 stag dos myself (yep, 17), I’ve felt it many times. It’s not simply the fear the stag’s second cousin/mate from school/colleague/future brother-in- law will be the sort of banter-obsessed miscreant who will insist you and your actual friends should all wear the ‘LADZ LADZ LADZ’ T-shirts he’s had made. It is the fear that the stag do on which you are about to embark is going to be as exhaustingly, liver-damagingly, wallet- bashingly ridiculous as every single one I have been on. I don’t care where your man is going.

YOU THINK YOU KNOW WHAT YOUR PARTNER’S FEELING AS HE PREPARES TO LEAVE FOR A STAG DO, DON’T YOU? Photo Gallery

I don’t care if he is going to be paintballing, go-karting, rock climbing or playing Zorb football. Stag dos all follow the same simple formula. Meet up, consume vast quantities of alcohol and try not to cry as you endure the pain of a hangover so bad, you would gladly pay £1,000 to be transported back to your wife/ girlfriend for a cuddle on the sofa. Dismiss me as boring if you like, but there’s plenty of evidence to suggest the majority of men agree with me – they just don’t feel they can say so. Last year, a joint study by Madrid and Salford Universities concluded that men on stag dos are ‘performing’ a role rather than enjoying the party. ‘hese men are merely reproducing the exaggerated forms of behaviour expected of them and that they expect of themselves,’ the report claimed. In other words, we go along with the drunken mob mentality for a few days because a) getting on a Ryanair light with some friends apparently makes our normal values and morals disappear and b) ‘it’s what you’re supposed to do’. 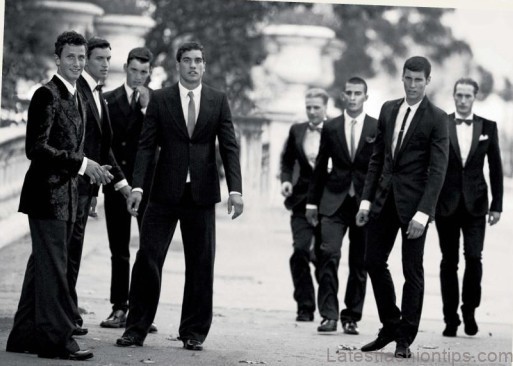 Reluctant high-jinks his partly explains the madness that sees British men spend £500 million on stag dos every year. A survey by travel irm Red 7 – which specialises in stag and hen parties – estimates the average reveller spends £168 on alcohol alone during these endurance tests. hat’s £100 more than on food. Aside from bringing your overdrat limit into sharp focus, consuming £168 of cheap booze in 36 hours can make a man do some dat things. I thought I had some horrifying tales – like the (possibly apocryphal) story of a friend of a friend lying naked on a strip club stage, having whipped cream licked of his genitals… with his future father-in-law next to him, ‘enjoying’ the same experience. However, in some cases, these ‘high-jinks’ can have more serious consequences; like the stag party travelling from Bratislava to Luton in February 2016, who acted so badly that their Ryanair light was forced into an unscheduled landing in Berlin.

On some tragic occasions, the very worst can happen. In May last year, a 32-year-old British man died during a stag in Portugal, ater he was allegedly thrown into Lisbon’s River Tagus as a prank. OK, I’m painting a bleak picture, I know. However, there is hope. A couple of years ago, I went on my own stag. Again, it followed the classic template of alcohol with occasional activity breaks (hungover Zorb football, in my case – an opportunity to try and avoid vomiting while playing football in a big plastic bubble). Again, I couldn’t remember a thing. And again, my wallet, liver and brain all felt the negative efects for weeks aterwards. It was due to this, not long ater my own ‘send of’, that I decided to quit drinking altogether. At the age of 35, newly married and with a baby on the way, I realised a new day had dawned. hankfully, the same revelation has hit many friends – all of whom, crucially, are at the same stage in their lives as I am, and all of whom are becoming as stag weary as me. Hence, when a close pal got married last year, I was able to go on his stag party as a sober, dull, teetotaller. As unthinkable as it seemed when I was 25, I managed to drink nothing more than tonic water, and nobody had me castrated or excommunicated from the brotherhood of man. My friend even had the good grace to opt for a single day stag (imagine!) in some London pubs. So, if your iancé is already fed up with the wave of stags he is no doubt having to attend, tell him to hang tight. Get through around 17 of these debauched weekends, and he and his friends will soon revert to sitting in pubs (OK, maybe not sober) acting like normal human beings.

3D-Printing My Own Custom Face Masks